Wrapped in a blanket on a cold winter morning, Durjoy was listening intently to something while taking sips from his coffee mug. There was this constant smile lingering on his lips. He was listening to the voice notes. The ones that he was sent every day for the past three months. He had never in real life known the person behind that voice. He never intended to find out. All he appreciated was this moment that he had and these voice notes he was listening to.

He used to listen to this voice whenever he wanted. It was one of the sweetest voices he had heard. It inspired him, flirted with him, made him laugh, made him cry, seduced him and what not. It made him believe in himself. He knew that it was impractical to think this way. But, he couldn’t help but wonder how he had become addicted to hearing this voice. Also, he wondered how he would approach her. Yes, he finally had a date with this voice note girl. 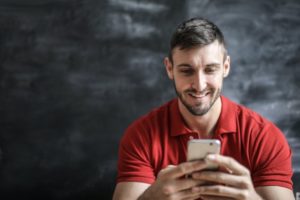 His phone flashed suddenly, breaking his chain of thoughts. There was a notification on Instagram. A new voice note. From her.

She wanted to confirm if he was ready for this date. To be honest, he wasn’t. He had always been this introvert guy. He didn’t know how to approach someone even if that person has virtually spent time with him and made him feel comfortable.

He still remembers the first time he heard her voice. She was a mutual connection on Facebook. They started texting and gradually moved on to Instagram. After a couple of days of texting, she started sending him voice notes. He found these cute. Before that day, nobody had ever sent him voice notes. It was kinda new and he was enjoying it.

The conversations slowly moved to a flirtatious direction. This was a new experience for him. He didn’t flirt much. But he liked this. Everything that was happening between them was new and exciting.

Six months ago when he came to Canada for the first time, he was just a shy guy. He still is a shy guy. But, things are changing now. He has started liking this place more. Maybe it was the changing season that is making him feel this way. Or maybe it was love.

Walking through the snow-clad streets of Vancouver, he checked the flowers to see if they were intact in his winter coat’s side pocket. With a satisfying smile on his face and a gleam in his eyes, he entered the cafe that they had chosen as the meeting point.

As soon as he entered the cafe, his phone had a notification. A new voice note from her….

He started scanning the room abruptly. In a matter of seconds, he spotted that face. It was her, he knew it. The one with the curly hair and smoldering stare.

In the next few seconds, he was right in front of her. They sat there and talked for hours like two friends who had met each other after ages. And then, she left.